AP – The Miami Heat already were having a rough road trip. Now they may have a feud between their stars and their coach.

Dwyane Wade sat out the entire fourth quarter Monday and Chris Bosh played just 40 seconds of it as the Heat stumbled to their third loss in four games, 104-97 to the Jazz.

Wade, who finished with 11 points on 5-of-11 shooting, had no explanation for why he did not get off the bench in the fourth quarter.

LeBron James, who needed 50 points to become the youngest player to reach 20,000 for his career, scored 32, but the Jazz held on after nearly blowing a 21-point lead.

”We’re trying to learn how to push a lead from 20 to 30 and close teams out, but we haven’t been able to do that for whatever reason,” said Jazz guard Gordon Hayward, who finished with 22 points on 8-of-13 shooting. ”We need to be able to keep our foot on the gas and not be hesitant.”

Play our best players? Play arguably 2 of the top 10 players in the NBA? Spoelstra says “I aint got time for that.” Nope he’d rather keep Bron Bron in there with Joel Anthony, Mario Chalmers, Ray Allen and Udonis Haslem while subbing Rashard Lewis in and out. Yup. Hey You, Wade and Bosh, just sit there tight and sip on some of that horribly tasting orange Gatorade. Best part about this is Wade and Bosh werent even having that bad of a night. Wade was 5 for 11 which is average. And bosh was 8-13. So what gives, Erik?

What gives is that fact that Spoelstra couldnt manage a lemonade stand never mind an NBA basketball team with such large personalities as 3 of the top 10 talents. Im 100 percent convinced that last year had everything to do with Bron, Wade, Bosh and Riley and absolutely zip to do with him. Guy doesnt even look like a coach. Look…

He reminds me of a water boy. Or a team trainer. Not their coach. You know Riley is pulling the strings from the top. Kind of like Jerry Jones and Jason Garrett. Only this time Spoe probably heard enough of it and was like “sorry, Riles, look what I can do.” Now Im no Heat fan. Im a Brooklyn boy and have been since J.Kidd was running them in Jersey, but I so hope he gets canned. Although if he wants to sit the Big 3 every time they go up against the Nets, Im perfectly set with him staying. Those are my conditions for him remaining.

Seriously though, how does he not look like a team trainer?

Google just brought me this little number. Apparently its Erik’s on and off girlfriend. Seriously, fuck you, Erik. 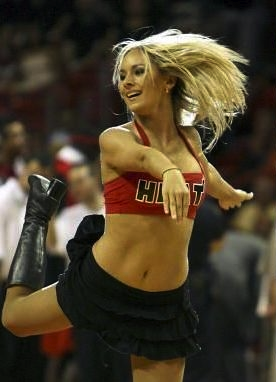